skip to main | skip to sidebar

Is the Economic Crisis Over - or Just Beginning?

Hear podcast of economist Jack Rasmus, author of The War at Home: The Corporate Offensive from Ronald Reagan to George W. Bush on "Is the Economic Crisis Over - or Just Beginning?" on High Road's Equal Time radio program.
Posted by Traven at 4:51 PM 1 comment:

Budget Cuts: Legislative Leadership; Like a Deer in the Headlights?

Tuesday, April 22nd, more than 33 advocacy groups, including the Vermont State Employees Association, Vermont-National Education Association, Vermont AFL-CIO, and High Road Vermont, representing tens of thousands of hard-working Vermonters called on Governor Douglas and the General Assembly to resist the urge to slash programs, and instead invest in Vermont and its people.

Governor Douglas and the Legislature jointly proposed budget cuts that threaten vital services for many Vermonters, including our most vulnerable residents. That was before the Governor sucker punched the Legislature with his “stimulus package.” (Need some comic relief - see the governor explain (?) his stimulus package at the Vermont State Employees website.

The legislative leadership is reeling in the face of an April 15th economic forecast that says, in part, that:

A gathering economic storm has begun to roil the Vermont and U.S. economies, with global credit markets in flux, the real estate sector unhinged, oil prices at record highs, consumer spending now in retreat and job losses mounting… virtually every key economic indicator has deteriorated, leading to a further downgrade in revenue projections for the State in FY09 and FY10 and raising the specter of further downgrades in July if conditions do not stabilize soon.

When the state cuts spending, lays off employees, reduces payments to nonprofits that provide services, and cuts benefit payments to individuals, all of these steps remove demand from the economy, which only worsens a downturn at the very time that the need for public programs increases, as residents lose jobs, income, and health insurance. Our state’s economic future depends on making necessary investments in all of Vermont’s people – not just businesses and developers. Why not eliminate the state’s wasteful business subsidy programs? We need to invest in education, job training, infrastructure, and other areas of state spending that have been shown to increase long-term economic growth.

The truth is our economy was failing working families long before there was news of a housing crisis, a mortgage crisis, or a stock market crisis. These crises are the result of decades of economic policy that prioritized Wall Street over Main Street. Stagnant or declining real wages and vast wealth inequities form the house of cards upon which our current economy was built.

The bubble in housing and other real estate, spurred on by easy access to mortgage lending, home equity loans and other forms of consumer credit, substituted for the wage increases that workers were not getting. Workers were told they couldn’t get wage increases, but “have we got a loan for you.”

Corporate and government policymakers have been running our economy into the ground - with an increasingly low-wage workforce instead of a growing middle class. The downward shift in wages is moving higher up the career ladder. The inflation-adjusted earnings of college-educated workers have fallen since 2000. More and more jobs are keeping people in poverty instead of out of poverty. Middle-class households are a medical crisis, outsourced job, or busted pension away from bankruptcy. Rising food, fuel/transportation, and healthcare costs are pushing more and more working Vermonters to the brink. Working Vermonters reaped none of the benefits of the economic expansion that preceded the current downturn. The American Dream is the American Pipe Dream for more and more people.

At the same time, the share of national income going to after-tax corporate profits is at the highest level since 1929. Fueled by obscene wage inequality and tax cuts, income and wealth are piling up at the very top. The income for top tax filers (those with more than $1 million - only 492 of them) increased by $338 million from 2005 to 2006!

Vermont could reap an estimated $20 million annually by closing a capital gains loophole that allows wages to be taxed at a higher rate than investment income. Slashing funding in human-service programs (for example, in prescription drug and health care programs), would have more severe financial impacts than raising the taxes on the most prosperous taxpayers.

Government’s role is not to cut back as families often must do when the economy falters. When people are struggling, government should do more, not less. Unlike many families, government can raise additional revenue or dip into reserves – rainy day funds – to get through the rough periods.

The Governor and the Legislature have been having the wrong conversation. We need to talk not just about how they’re going to cut the budget. We need leadership that talks about how we’re going to put people to work, how we’re going to stimulate the economy by strengthening working families, and how we can best organize ourselves to force these changes on the powers that be.

Is Vermont Really on the Job? 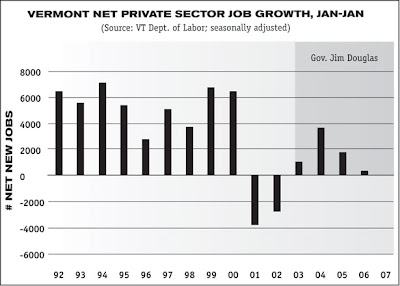 By Doug Hoffer in Seven Days

In Vermont, as across the country, there’s been a lot of talk about jobs and economic development. Bluntly stated, the economy has been lousy for some time now. Yet two months ago, Governor Jim Douglas touted his record in his “State of the State” speech, greatly exaggerating his accomplishments in this regard.

Here are the facts:

In the last 12 months, the number of net new private sector jobs in Vermont was zero — none. For comparison, the median during the 1990s was 5700 per year (see chart). Moreover, this recent weak job performance is not new; private sector job creation in Vermont has been anemic for three years.

In fairness, this is not all the governor’s fault. The forces at work are powerful and largely beyond our control: the federal budget, interest rates, trade agreements, currency exchange rates, etc. Nevertheless, Vermonters should be asking some tough questions: How much do we spend? For what? Are current economic development programs working?
Read more...

Today, as we enter a recession that threatens to become severe, there are indications that this may become the deepest economic crisis since the 1930s. This has the potential to cause widespread suffering because it is taking the form of a crisis of stagflation, that is simultaneously an economic downturn and rising prices. Along with rising unemployment, recession would eventually result in millions more men, women, and children living in poverty, people losing health-insurance coverage, and an estimated drop in family incomes of $2,000-3,700 per year. Effects may extend as far as 2010 or 2011, depending on the severity of the downturn ("What We’re In For: Projected Economic Impacts of the Next Recession).

Impact on State of

At least twenty-five states face budget shortfalls in fiscal year 2009. has a projected shortfall of $59 million, or 5.1% of the FY2008 General Fund. The combined budget shortfall for these states is at least $39 billion .

The federal economic stimulus package enacted in February not only cuts federal taxes, but also threatens to reduce many states’ corporate and personal income tax revenue this year and next year. may lose $7 million annually in revenue due to a provision of the stimulus package known as “bonus depreciation,” retroactive to January 1st, which allows businesses to claim an immediate tax deduction for new equipment purchases. Read the rest of this entry
Posted by Traven at 1:36 PM 2 comments:

As the above chart reveals, under the Bush administration's stimulus proposal, over 70% of the rebate would go to the top 40% (income above $47,000) and less than 10% would reach the bottom 40% (income below $27,000). According the analysis by the Brookings-Urban Institute Tax Policy Center, 55.9 million households would get no rebate at all from the plan, in part because many households pay no federal income tax. Most of these households, however, do pay other forms of taxes, such as payroll taxes on their earnings.

Read a blog on the Huffington Post lambasting the bi-partisan House/White House deal.

According to the Economic Policy Institute, “the White House plan suffers from very poor targeting, and thus fails on two critical criteria: efficiency and equity.

For a tax rebate to be both more effective and more equitable, it should be targeted at low- and moderate-income households.”

We need a plan that provides immediate aid to cash-strapped states, and spending on repairs and maintenance of schools, bridges, and other public infrastructure.

Economic impotence package? are quite telling:

President George Bush's success in framing negotiations for the package around tax cuts rather than mortgage reform is almost as breathtaking as his ability to convince Democrats to pass an unfunded bill.

Treasury Secretary Henry Paulson has repeatedly cited the deteriorating housing market as a major threat to the broader economy... But it is remarkable that the only provisions in the final House package that address the mortgage market are increases in loan limits at government-sponsored enterprises and the Federal Housing Administration, which effectively allow the government to securitize more loans."

Posted by Traven at 9:34 AM No comments:

"Nothing like a little catastrophe to help you sort things out" - from Antonioni's film Blow-up:

On the cusp of economic history
By Katrin Bennhold

DAVOS, Switzerland: Is economic history about to change course? Among the chieftains of politics and industry gathering in Davos for the World Economic Forum on Wednesday, a consensus appears to be building that the capitalist system is in for one of those rare and tempestuous mutations that give rise to a new set of economic policies.

As the prospect of a U.S. recession overshadows a tense and drawn-out election campaign in the world's most emblematic market economy, a corrosive cocktail of factors is eating away at old certainties More...
Posted by Traven at 2:41 PM No comments: